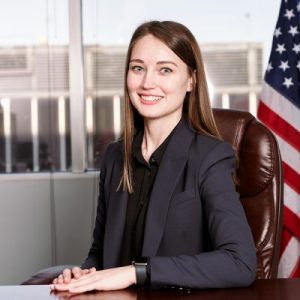 Biography
Yulia Hasty, Esq. is originally from a small Russian town, just outside the city of Yekaterinburg.

Yulia worked for the international gas company, Gazprom, as an in-house counsel. One of her most notable accomplishments was establishing and organizing a subsidiary company for Gazprom.

While working her way up in the United States, Yulia began her legal career as a legal assistant for a Russian-speaking practitioner by assisting with several high-priority immigration cases and projects. Yulia garnered additional experience while interning at the Los Angeles Superior Court, where she worked closely with the Supervising Judge for the South District, James Otto. There she thoroughly observed the court system by attending criminal and civil trials and preparing comprehensive legal research documents for the district judges.

Being an immigrant herself, Yulia knows first-hand the difficulties of applying for immigration benefits. She takes great pride in her craft and fully dedicates herself to each client.

Experienced in Representation Clients In

She specializes with Russian-speaking clients from all parts of the world including Russia, Ukraine, Armenia, Kazakhstan, Israel and many others.

Do you have a case? Send us a message